Two years before the looming threat of a national monument designation led to the creation of the Hemingway-Boulder, White Clouds, and Jim McClure-Jerry Peak Wilderness areas in central Idaho, I stood a short distance from one of the many 10,000-foot passes that made permanent protection for the area so attractive.

The previous evening, my companions and I had left the trail to scramble over a narrow notch and camped beside a small cirque, far from any neighbors. By the time we reached the pass the next day, we hadn’t seen another soul, except for native cutthroat trout, for nearly 24 hours.

Amid mountains streaked with a litany of mineral deposits and 400-year-old, gnarled whitebark pine trees that once provided late season nourishment for grizzly bears, we plodded slowly through an otherworldly landscape.

But any plans to lose ourselves in the moment were dashed when a mountain bike, coming over the pass, raced by us at a speed incomprehensible to a tree that stood long before any white man had visited the region. A minute later, another biker, head down, streaked by. And five more, riders all heads down, screamed past before we could continue our uphill march to the pass. “It just doesn’t fit the pace of the place,” declared one of my companions. 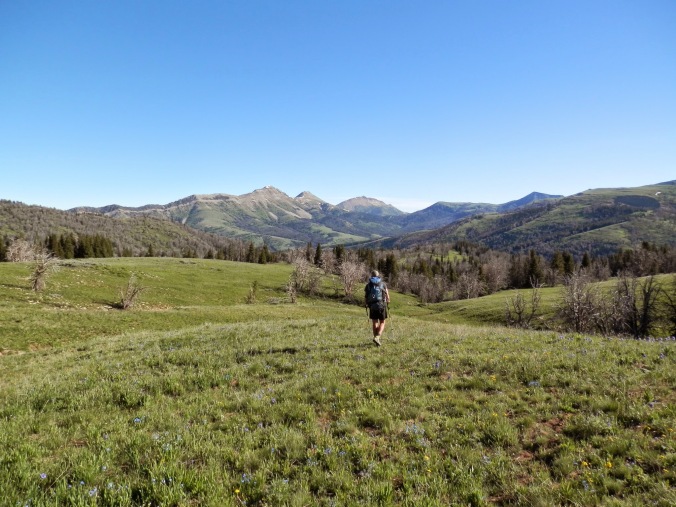 While some skeptics might be quick to scoff at this anecdote as oversentimental bellyaching, it hopefully offers a window into what wilderness designations protect, ecologically, but more importantly, when considering the intangible benefits to be reaped from untouched, natural places where modern humans have had little to no influence.

Over the past several years as the mountain bike lobby has grown, led by groups like the Sustainable Trails Coalition, the debate over whether mountain bikes should be allowed in wilderness has largely focused on questions like what does “mechanical” mean, can horses be just as ecologically-harmful as bikes, how do different recreationists enjoy the scenery around them, and couldn’t Wilderness use more advocates (i.e. mountain bikers)?

While each of these questions warrants a response and a plausible argument could be made from either side, they all miss the point when it comes to the foundational question of what do we mean by Wilderness (as both a legal construct and a state of mind) and why must we protect it?

When Congress passed the Wilderness Act in 1964, the interstate highway system was being built, the country was in the middle of what author Marc Reisner termed the “go-go years” of dam building and pesticides like DDT were still in common use, nearly leading to the extirpation of our national symbol, the bald eagle.

Despite the ecological destruction underway, Congress recognized there were some places better left untouched, and the only way to afford permanent protection was to create a law as uncompromising as the Wilderness Act. The thinking, actually, had been building for decades.

Through this lens, the passage of the Wilderness Act represented a not-so-subtle acknowledgement that unless we mandated by law that we don’t do something—Americans would eventually find a way to do that very thing. The Wilderness Act was passed to protect Americans from ourselves as much as it was to protect lands, water and wildlife from mining, logging or any other threat.

As a nation, there are many things we do well —but self-restraint isn’t one of them. More than 50 years ago, advocates and lawmakers recognized that if we didn’t permanently protect our most treasured landscapes from development, later generations would ultimately find some excuse, equivocation, or justification to allow development to accommodate some modern “need.”

In the past year alone, under the Trump Administration, we’ve seen these kinds of activities proceed on landscapes that deserve protection but have remained opened to development.

In December 2017, for the first time ever, despite standing proposals to designate the area as Wilderness, Congress voted to open the Arctic National Wildlife Refuge—yes, one of the country’s premiere Wildlife Refuges—to oil and gas extraction. A few months earlier, Interior Secretary Ryan Zinke allowed a moratorium on leasing for oil and gas extraction in prime sage grouse habitat to expire. And he has been eyeing ocean coastlines for ramped up drilling, too.

Around that same time, President Trump downsized Bears Ears and Grand Staircase-Escalante National Monuments in Utah, which will pave the way for development such as uranium mining to proceed.

Similarly, despite robust efforts to fight it, in the Greater Yellowstone Ecosystem, a Canadian company is hoping to mine for gold on the outskirts of America’s first national park.

Even with Wilderness protections in place, Secretary Zinke is in the process of making a deal to build an 11-mile road through a Wilderness designated portion of the Izembek National Wildlife Refuge in Alaska.

Although all of these places have been deemed sacred—both by Native Americans and others who appreciate the scarcity and necessity of untouched wild places—that sense of close connection to and reliance on those landscapes has proved little match against the insatiable, single-minded American impulse to develop without prejudice.

Which brings us back to mountain biking and the agenda of some of its adherents.

Notably, two of the lawmakers supporting Trump’s action to shrink Bears Ears were Utah’s U.S. Senators Mike Lee and Orrin Hatch, both of whom were also enlisted by the Sustainable Trails Coalition to help advance legislation to weaken The Wilderness Act and allow mountain bikers into our most protected landscapes. Lee and Hatch have some of the worst environmental voting records on Capitol Hill.

When considering the long list of environmental threats facing the world, our country and the West, the prospect of allowing mountain bikes in Wilderness, admittedly, ranks fairly low. But when examining the issue through the broader lens of our ominous environmental future, with climate change shrinking the ecological function of many landscapes, any effort to weaken one of our foundational environmental laws is untenable.

It is true that Wilderness needs more advocates, but we do not need to relax our definition of what Wilderness is to accomplish this. Influential mountain bikers agree.

Instead the conservation community should work to rekindle the connection to, and love for, the natural world in all of its pristine splendor that once existed more broadly in our society.

For the past several years, the SHIFT Festival in Jackson Hole – its motto: “Where Conservation Meets Adventure” – has presumed to bring together the conservation and recreation communities with the goal of creating bonds between these diverging communities.

While the outcomes of GYC’s conference are yet to be seen, SHIFT has given the conservation perspective only token representation.

When I penned a similar essay two years ago, conference organizers quickly emailed their membership, linking to my article as alleged evidence that “radicals” – gasp, real conservationists – wanted to preserve our wildest places by safeguarding the law that has effectively protected them over the past 50 years. And for them, such a notion would irrevocably undermine any relationship between conservation and recreation.

When confronted, SHIFT organizers backed down from their attempts to malign and divide conservationists in favor of the desires of user groups. Still, its tactics of trying to delegitimize the accomplishments of conservation, as being out of date, deserve scrutiny.

According to SHIFT’s website, it says, “with the membership of traditional conservation organizations aging, outdoor recreation offers a remarkable opportunity to reinvigorate the protection of our public lands and waters.”

Aside from the fact that a segment of young people have consistently stood up for strong environment policies – as protests against Zinke’s national monument review and climate change lawsuits have demonstrated—it is generally true that the memberships of environmental organizations are aging.

Yet when conservationists of yesteryear stepped forward and fought to create the protected landscapes we enjoy today, they were young. In the Greater Yellowstone Ecosystem, which still possess wildness and concentrations of wildlife found nowhere else in the Lower 48, the stakes are high.

The author takes a rest on the Continental Divide Trail in the Anaconda-Pintlar Wilderness. Photo courtesy Michael Dax

As we look fifty years into the future, what is the greatest threat to the environment? Climate change? Pollution and contamination of air and water? Habitat fragmentation brought by development? All good answers.

But more fundamentally, it is the loss of understanding and appreciation for the natural world and the delicate interwoven systems that have long supported plant, wildlife and human communities. Without this underlying connection and appreciation for protecting what is truly rare, how will we even begin to address those other issues?

The idea of Wilderness requires our acknowledgement that there should be places where human considerations are secondary to ones that value natural systems functioning fully and properly without our intervention. The debate over whether to allow mountain bikes in Wilderness has re-focused that conversation and, ironically, has naïvely elevated human recreation as the primary value of Wilderness.

Like many Wilderness advocates, I, too, am an avid recreationist whose love of wild places was borne out of my experiences in them. But as we look into the future, we must have the magnanimity to understand that recreation is the reward for conservation and not the other way around.