Michael J. Dax is an author, environmentalist and outdoorsman based in Santa Fe, New Mexico. 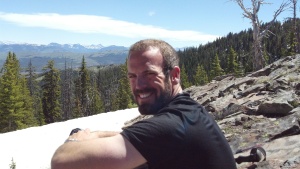 Growing-up in upstate New York, he developed a love of the outdoors at an early age, hiking in the Adirondacks of northern New York, the White Mountains of New Hampshire and the Berkshires of western Massachusetts as well as fishing in the pond behind his house and playing in the outlet stream below it.

A week after graduating college, he moved cross-country to live and work at Grand Canyon National Park, which he had first visited on a family backpacking trip several years earlier. After working at the El Tovar gift shop for six months, he moved north to Yellowstone National Park to groom the cross-country ski trails in the Old Faithful area. Over the next three years, he held a number of positions in the park including tour guide, bellhop and ski instructor.

After thru-hiking the Appalachian Trail in 2011, he relocated to Missoula, Montana to earn a masters degree in history, focusing on the American West, Native Americans and the environment. His experience in Yellowstone had solidified his interest in wild animals and human’s relationship to them, which led him to write his thesis on how the shifting politics and culture of the American West at the close of the twentieth century undermined a plan to reintroduce grizzly bears to the Selway-Bitterroot Wilderness. Grizzly West: The Failed Attempt to Reintroduce Grizzly Bears in the Mountain West (University of Nebraska Press, 2015) is his first book.

Dax has worked for a number of environmental organizations and campaigns including Defenders of Wildlife and Montana Wilderness Association. In addition to the Appalachian Trail, he has also thru-hiked the John Muir Trail and Annapurna Circuit.

He holds an M.A. in environmental history from the University of Montana and a B.A. from Brandeis University in Waltham, Massachusetts.