This year the Wilderness Institute is monitoring the Welcome Creek Wilderness, southeast of Missoula, and the Anaconda-Pintler Wilderness, west of Anaconda and south of Phillipsburg. I had never before visited the Pintlers, but I had often gazed upon their snow-capped peaks longingly as I tried not to drift off I-90 on my way to and from Missoula, so it did not take much prodding for me to sign-up for a trip. 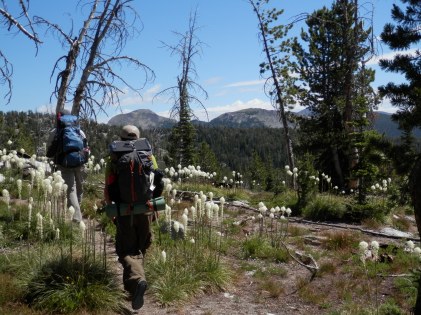 Walking among bear grass on the CDT in the Anaconda-Pintler Wilderness, photo by author

I did not really know what to expect, but one thing I learned pretty quickly was that this was not going to be a traditional “guided” trip. Because the Institute tries to monitor every mile of trail that means walking trails that see little to no human traffic. This translates into route finding, fallen trees, bush whacking and all the other things that can make a trip adventurous. At an organizational meeting a few days before the trip, our leaders, Sara Meloy and Drew Lefebvre, made it clear that they did not know what to expect from the trails we had planned for our route.  Much of our trip would be on the Continental Divide Trail, but they had no idea what the condition of the other trails would be.

Another thing I immediately realized from this meeting was that the trips attract a diverse range of people. In addition to our two leaders, who were both in their second summers leading these trips, our group included Corey, a student in UM’s Wildlife Biology program who had spent vast amounts of time in the Pintlers. Our other group members, Ann Marie and Mary, were both from the Bitterroot Valley. This was Ann Marie’s fifth season doing trips with the Wilderness Institute, but Mary was new to the program and her backpacking experience was limited.

We arrived at the trailhead a few days later, and split up into two groups. Sara and Drew both had GPS units to record the data, while us volunteers were tooled with a notebook and 7.5 minute quads to record the hard-copy back-up data. The hiking was slow as we stopped to record each time we heard a non-natural noise (which was almost always an airplane), found invasive weeds, noticed water erosion on the trail, observed any kind of human development or passed by other hikers.

Our trip lasted four days and three nights and was a wonderful wilderness experience. Even so, something about it fell a little short for me. I could never understand why we wrote down every time we heard a plane pass over at 30,000 feet, and I had a hard time believing that recording every pile of moose scat was going to be all that meaningful. We recorded over two hundred points, all of which focused on the negative.

In our efforts to note every little thing that was wrong with the wilderness, I felt our data overlooked everything that was good about it. After the first few miles, we saw two CDT thru-hikers for a total of thirty seconds. The views were spectacular, as were the fields of bear grass and wild flowers. Not least of all, I had some of the best fishing of my life. While everyone may have a different idea of what wilderness is, for me, this trip afforded me the ideal wilderness experience. I had more than adequate opportunities for solitude and felt as if I was consumed by a natural landscape, untrammeled by man. 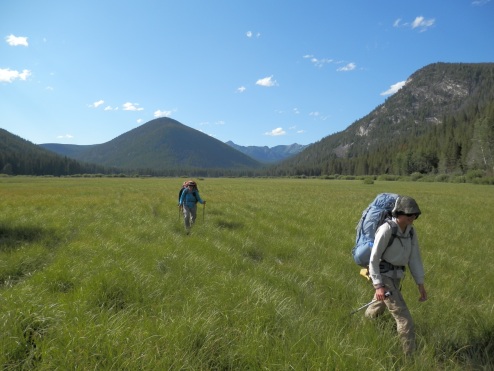 Overlooking some of the tedious aspects of the trip, the Wilderness Institute’s Citizen Science program is enormously valuable. Because it plans the trips, does the driving, and cooks dinners, it gives people the chance to experience wilderness who might not otherwise have the opportunity. The trips are adventurous as the routes are uncertain and the terrain difficult, so all volunteers must be in good shape and be able to haul a heavy load, but they introduce members of the public to scientific field work and help them better understand how our National Forests are managed. Furthermore, the data it collects is enormous valuable. This year is the first time the Wilderness Institute has returned to a wilderness area, so the data they collect this summer will be compared to data collected eight years ago. With this comparison, the Forest Service will be able to more efficiently use its resources to better manage the area. And this is ultimately what matters. I want the Anaconda-Pintler Wilderness to be in the same, if not better, condition twenty or fifty years from now, and with this data, that will be possible.